I’d like to return to our ongoing discussion of how the Church sees the Ark of the Covenant. In our previous post in this series, we looked at the poetry of Saint Ephrem the Syrian. Now we’ll turn our eyes westward to examine what some of the most well-known western saints, Ambrose and Augustine, said about the typology expressed by the Ark. 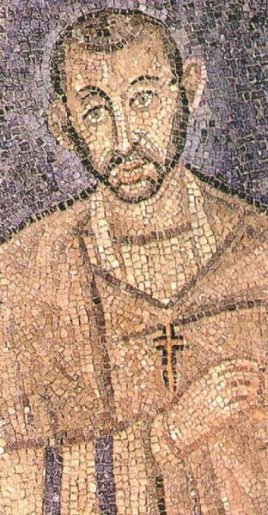 Saint Ambrose, living from 340-397, provides perhaps the clearest “rationale” for seeing the Ark as a type of Mary. He draws a number of parallels between the Ark and the Virgin in which those applied to the Virgin exceed those of the Ark. He contrasts the Law with the Gospel, the voice of God with the Word of God, and the glitter of gold with the splendour of virginity.

The prophet David danced before the Ark. Now what else should we say the Ark was but holy Mary? The Ark bore within it the tables of the Testament, but Mary bore the Heir of the same Testament itself. The former contained in it the Law, the latter the Gospel. The one had the voice of God, the other His Word. The Ark, indeed, was radiant within and without with the glitter of gold, but holy Mary shone within and without with the splendour of virginity. The one was adorned with earthly gold, the other with heavenly.1

Saint Augustine, living from A.D. 354-430, seems to be one of the few among his contemporaries who holds the Ark to be a type of the Church as the body of Christ rather than a type of the Virgin Mary. The very passage that Saint Gregory Thaumaturgus earlier interpreted as speaking of the Holy Virgin, Augustine interprets as referring to the Church.

Arise, O Lord, into Your resting place [cf. Psalm 131]. He says unto the Lord sleeping, Arise. You know already who slept, and who rose again… You, and the ark of Your sanctification: that is, Arise, that the ark of Your sanctification, which You have sanctified, may arise also. He is our Head; His ark is His Church: He arose first, the Church will arise also. The body would not dare to promise itself resurrection, save the Head arose first. The Body of Christ, that was born of Mary, has been understood by some to be the ark of sanctification; so that the words mean, Arise with Your Body, that they who believe not may handle.2

In the next post in this series, we will examine the more practical approach to this topic as presented by Saint Jerome.

1 Qtd. in Thomas Livius, The Blessed Virgin in the Fathers of the First Six Centuries, (London: Burns and Oates, Limited 1893), p. 77.