Given that Lazarus Saturday is fast approaching, and I am particularly fond of this story, I want to share a comparison I did a while back of a western painting of the story of Lazarus with an Orthodox icon of the same story. There are many very striking western representations of the story, but I find the baroque of Jean-Baptiste Jouvenet particularly engaging.

What is striking to me about this image is not only the use of light to draw the eye to key points, but realism blended with the surreal. The characters have a three-dimensionality and detail, that while not quite photographic, is starkly contrasted with Orthodox iconography. And yet, the realism seems incongruous with the unbelievability of the scene. The image portrays what seems to me to be extreme chaos. The chaos revolves around the central figure of Christ who seems to anchor reality in place.

What almost destroys the coherence of the image is Mary, Lazarus’ sister. Her bright white garments almost seem to glow brighter than Christ himself. My eye is naturally drawn first to Christ, but before locking in on Him, it is almost distracted by Mary enough to take a short detour. But Christ is deftly positioned by Jouvenet, according to the rules of composition, to be the center of balance of the image. The eye is naturally directed from Christ to Mary next. Mary, just as in Orthodox iconography, pleads with Christ, taking a central role at his feet.

The eye finally moves from Mary to Lazarus, whose portrayal is perhaps one of the most intriguing aspects of this image. He is clouded in shadow, not having completely emerged from the cave. His expression, while difficult to discern, evokes a sense of astonishment mixed with awe. If the lighting were brighter, I could imagine tears.

The scene does seem to borrow a modicum of fashion influence from Jouvenet’s world and perhaps some European facial features, but I think this can be forgiven. We all tend to inject portions of our own experience back into our work. Additionally, one might wonder how a stone would fit over the mouth of this “cave,” but I think this too can be forgiven and chalked up to artistic license. Overall, this painting is quite remarkable and one that I would be proud to hang in my living room. 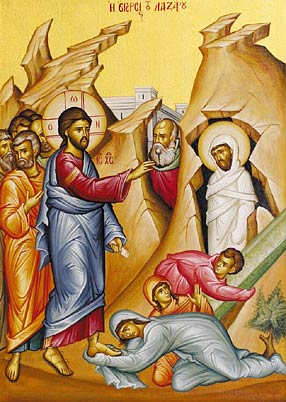 On the right, you will find a fairly typical Orthodox icon representing the Biblical account of the resurrection of Lazarus.

What is most noticeably different between the images is the level of “passion” involved in the scene. Jouvenet draws you into the scene in an emotional way. Most of the key elements of the story are still there, it is the dynamism, emotional expressions, and the pure chaos that overwhelms the senses. The overwhelming difference between the two is how each makes you feel when you view it. The feeling I have when I view the Orthodox icon could almost be described as dispassionate.

Another key difference between the two images is the sense of noise. The icon removes nearly all extraneous information. All of the key elements of the story are portrayed in the image, but there is almost nothing extra. The story is fully told, but only the story. On the contrary, the Jouvenet creates an entire world full of things that quite possibly never existed. These features serve to convey a certain feeling and sense that that author wanted you to feel, but are not necessarily an accurate representation of the story. While beautiful, the baroque piece actually transmits a great deal of noise to the intellect of the viewer. The icon teaches us about the resurrection. The Jouvenet teaches us about our reaction to the resurrection. Because of this, the Orthodox icon is clearly better suited for pedagogical purposes and also for veneration. In venerating the Jouvenet, we would be venerating something more than the Biblical event. We would be venerating a creation of the mind of Jean-Baptiste Jouvenet. However, in venerating the icon, we much more closely venerate the Biblical event and only the Biblical event.

In conclusion, the Jouvenet is a beautiful work of art that can very much be appreciated by anyone who loves art. It does convey a sense of a real event in the life of Christ in a very beautiful and engaging way, albeit with a strangely emotive force. However, as a pedagogical tool or as a means of veneration, this beautiful painting is unsuitable. It cannot convey the story in its pure form. The Orthodox icon distills the image into its most fundamental aspects and conveys the meaning of the event to the intellect and the heart in a way that the Jouvenet does not. It reaches past the emotions into the soul of man.