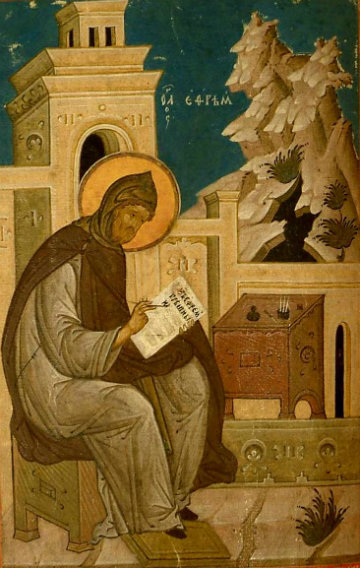 Now we come to one of my favorite parts of our ongoing discussion about how the Church perceives the Ark of the Covenant. In the works of Saint Ephrem, a contemporary of Saint Athanasius, we find the most poignant expression of this typology to date. Saint Ephrem’s poetic genius strikingly and undeniably expresses the beauty of the typology. Saint Ephrem references this typology multiple times. Below are two of the most interesting references.

With the weapon of the deceiver the First-born clad Himself, that with the weapon that killed, He might restore to life again! With the tree wherewith he slew us, He delivered us. With the wine which maddened us, with it we were made chaste! With the rib that was drawn out of Adam, the wicked one drew out the heart of Adam. There rose from the Rib a hidden power, which cut off Satan as Dagon: for in that Ark a book was hidden that cried and proclaimed concerning the Conqueror! There was then a mystery revealed, in that Dagon was brought low in his own place of refuge! The accomplishment came after the type, in that the wicked one was brought low in the place in which he trusted! Blessed be He Who came and in Him were accomplished the mysteries of the left hand, and the right hand. Fulfilled was the mystery that was in the Lamb, and fulfilled was the type that was in Dagon.1

In this cryptic passage, St. Ephrem begins by enumerating weapons by which the devil attacked humanity: flesh, wood, wine, and woman. For each item in his enumeration he alludes to how the devil used it as a weapon and God used it for salvation. The climax of his enumeration is the woman. Out of the female half of the race, God brought forth a hidden power, the Holy Virgin Mary. Mary is the antitype of the Ark that destroyed the idol of Dagon when the Philistines captured the Ark and housed it in the temple of Dagon (1 Samuel 5:1–7). In the Ark, as in the Virgin, was a book. The book, or tablets of stone, is a type of the only begotten Son and Word of God. The human race fell through the woman, but through the woman the human race was raised up and the wicked one was brought low. Each of the tools used as weapons by the devil contributed to his undoing and thus the typology behind the story of Dagon is revealed: the devil was brought low in the place in which he trusted.

The woman ministers before the man, because he is her head. Joseph rose to minister before his Lord, Who was in Mary. The priest ministered before Your ark by reason of Your holiness.2

In our next post in this series, we will examine what both Saints Ambrose and Augustine contributed to this discussion.